The Level 2 structure is the 'child structure' of the Head Quarter.

The info functions show some informations on the structure.

By using this function you can make offers to the structure by depositing some items.

By praying you can raise your Faith Level, Accumulated Faith Points and the Church Faith Points. For further details see Praying.

To be able to use private functions, the Structure owner will need to be properly dressed and hold specific tools in order to access the Religious Structure and perform duties. The equipment will be consumed every time a function is executed. For more details check here. The character will need also a Faith Point contribution of 940 Faith Points.

It is possible to transfer Faith Points to every structure of the same Church. 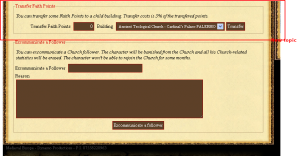 With this function you can assign or revoke a Level 3 Religious Role for the Level 3 structures you built.

For other details, see Appoint/Removal Costs

With this function you will be able to launch the construction of a Level 3 structure. The requirements to succesfully launch a level 3 structure are:

In this particular case who will finish the construction before will occupy the region. The other(s) buildingsites will remain incompleted and it won’t be possible to work anymore on them, though inventory will be accessible. Building can be destroyed later.

You can see what's stored in the structure inventory and take/deposit items.

The structure owner can rest in their assigned Temple/Church. For further details, see Resting.