Further duties may be: 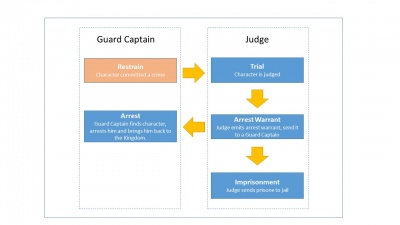 The Restrain command is a very powerful one and is mainly used for keeping a characters that broke Kingdom Rules to escape from the Kingdom lands. Only a Guard Captain can restrain a Character from the Barracks. See here for more details.

[edit] When and when not use restrain

Guard Captains of Kingdoms A of Alliance 1 (A,B,C) at war with Alliance 2 (D,E,F) cannot restrain citizens of Kingdom D,E,F and viceversa.

While restrained a char will be able to do only the following actions:

Restrain duration will be raised to 168 hours to be consistent with the following trial schedule time: 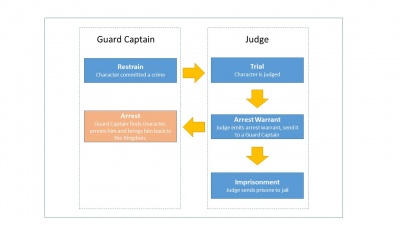 The Guard Captain can arrest a character if this has been received a Guilty Verdict from a Judge after a Trial. The Judge will need to create an Arrest Warrant and send it to the Captain that will be able to find the character and trying to arrest it by finding it in the Region Present Character list and clicking on it:

If the arrest is succesfull the Captain Guard will travel to his Kingdom bringing with him the character. for more information see Barracks and Prisons