A judge is the head of a kingom's law enforcement, opening and leading trials in accordance with the law and granting permissions to a Guard Captain to apprehend ciminals to jurisdiction.

The Judge is appointed by a Vassal 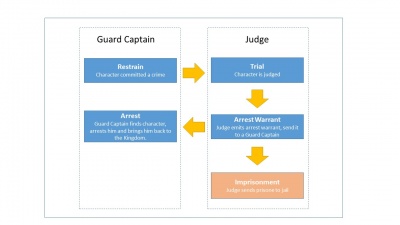 Judge can imprison a character and decide in which Jail the character will serve prison time, if there is a guilty verdict. During war, Imprisonment cannot be used. Mechanics prevents to imprison characters of a Kingdom engaged in war.

Judges of Kingdoms A of Alliance 1 (A,B,C) at war with Alliance 2 (D,E,F) cannot imprison citizens of Kingdom D,E,F and viceversa.