Noble Titles were introduced with Release 2.5

Since then all administrative roles, such as Regent, Vassal, Guard Captain, Judge, etc. can assign titles of administrative roles and noble status for role play purpose to citizens. Furthermore, in order to do that equally, all Countries had been renamed to Kingdoms (i.e. Byzantine Empire became the Byzantine Kingdom). This restriction was undone again later.

Prince, Duke, Marquis, Count, Viscount, Baron (all given by Regents), Lord, Knight (given by Vassals) and their respective female forms. These titles can be customized by the regent. 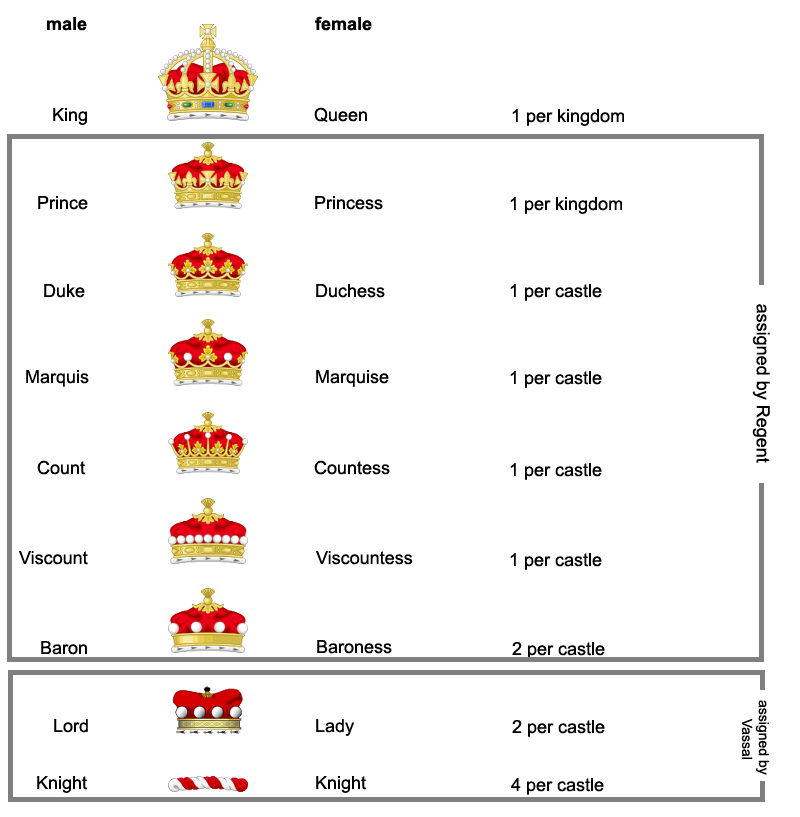 Listed below are a few notes about titles from a role-playing perspective. Note that neither noble titles nor gov. assignments provide any hard skill privileges or functionality over game mechanics.

Noble Titles in the Royal Palace

The Regent may name a Noble from the Palace's interface. Such title shall be assigned with caution, as a Noble represents an influential person on the kingdom's politics and may as well oppose the Royalty. Each Noble Title comes with the name of a related fiefdom or military organization (sometimes used for Knights).

i.e. Duke of Normandy, Baron of Ibelin, Knight of the Varangian Guard, ...

The influence of the Nobles is given by the Regents themselves, those listed below are simply suggestion of how they might be used.

Read your Kingdom rules to know how important a title is there!

There are two kinds of nobility a Regent may choose to give, depending on the growth of the Kingdom itself.

Each regent may name only one Prince for his Kingdom and one Marquis for each Castle built in their Kingdom.

The Prince is directly subordinate to the regent.

Their power and influence are great and their will is to be taken into consideration when starting an important project. They may, and often do, represent the designed person who shall take power at the regent's death or resignation.

The Duke is subordinate to the Regent as well.

Their power and influence are considerable and their will is to be taken into consideration when starting an important project. The title is most commonly given to Vassals

Each King may name a Marquis, a Count, a Viscount and two Barons for each Castle built in their Kingdom.

The Marquis follows the Prince.

They are the highest position a person may ask for not straightly involved with the King's life and/or family, as they mostly rely on the Vassal of their Land.

Their power is good, but not enough to really push decisions where their interests are, nevertheless their powerful allies for a congregation of Nobles.

The Viscount follows the Count.

Their power is good, but not enough to really push decisions where their interests are. They may be more influential at the local level, than the national one.

The Baron follows the Viscount.

Their power to the King is almost nothing, but maybe much stronger against a Vassal's decision, as they rely on the territory they were assigned.

Noble Titles in the Castle

The Vassal may, in the Castle, name a Noble. They may name two Lords and four Knights.

The Lord follows the Baron.

The Lord is the real first step to become a Noble. They showed peculiar bravery or skill that worth a Title, but they still don't really influence decisions at any level, as they are below Vassals.

The Knight follows the Lord They are the basic Nobility. They do not properly belong to the nobility, but they often are considered as Nobles. They may be named after bravery in Battle or as a reward for other out of the ordinary actions.

For titles within the religious hierarchy, see Religion Guide