From Medieval Europe
(Redirected from En US CharCreation)
Jump to: navigation, search

The choice of the name is very important. It is possible to use the automatic name generator but the player is also free to enter a brand new one. Some Rules exists:

[edit] Rules for choosing a name 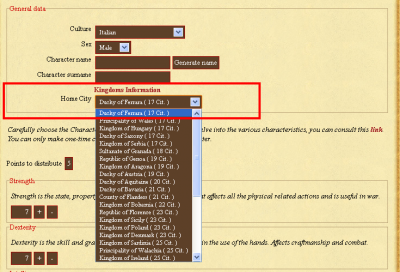 When you start out in the world of Medieval Europe, you will have the opportunity to set some base skills: Strength, Dexterity, Charisma, Constitution, and intelligence. These attribute points will contribute a lot to the gameplay and the way you play your character. For this reason, it's very important that you consider the way you allocate these points. Below there is a description of each attribute and how it affects a character.

Strength represents the physical attributes of a character. Characters with high strength will be able to endure more physically daunting tasks with ease.

Dexterity represents the grace and skill related to physical activity.

Charisma is a personal and rare quality, a personal magnetic characteristic that can positively influence the connection with other persons. Charisma can be affected in a positive or negative way of what is worn. For more details see Carisma Modifiers.

To control certain structures, you need to satisfy some Requirements. Charisma is one of them.

Read carefully the Requirements table before you set your attributes.

Constitution is the physical makeup of a person. A person may be of strong or weak constitution

Intelligence is the mental ability to learn and to apply the knowledge to easily adapt to new environments.