[edit] How it works

After initiative has been computed, the engine computer how many consecutive hits the attacker will deal.

The variables values will be normalized and summed.

Logic to hit or miss depends on the ratio between Attacker and Defender Dexterities.

If a character is stunned the attacker has a 100% chance to hit the opponent.

It will be possible to hit on following body parts:

Only with a weapon of reach at least 4, it will be possible to hit the part feet.

The armors will do not (as before) covers only the part where they are equipped but they extend also on other parts.

For example, before the plate armor was equipped on slot armor and its defense was effective only when the attacker was hitting the part “armor”. Now, the plate armor defense is effective also against hits on left arm and right arm.

If the defender is wearing a chainmail (defense 4) under a Leather Armor (defense 2), and a hit goes on part Armor:

If the Leather Armor eventually breaks the engine will consider only the Chainmail Defense and then consume the Chainmail. If the hit is landed on the left arm and the defender holds a shield, the damage will be absorbed by all the Shield.

The Base Damage is randomly selected within the range of damage values for the equipped weapon. With a Strength value of 10, an energy value of 50%, and a weapon condition of 50%, the damage will be randomly selected using a Normal (Gaussian) distribution centered on the mean of the weapon’s damage range. Thus, if the range is 1-7, a 4 will have the best odds of being rolled and a 1 and a 7 would have the worst odds of being rolled. 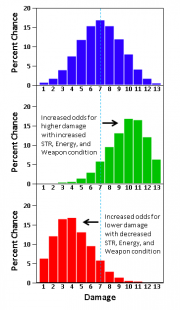 Attacker hits with a longsword, Computed Weapon Damage is 6. Attacker has strength 18. 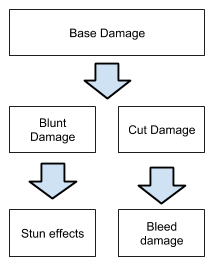 When the opponent is hit, damage is computed as follows:

[edit] What is Blunt Damage?

[edit] What is Cut Damage?

Cutting damage is the damage inflicted by the weapon slicing into flesh of an opponent. Cutting damage causes the initial damage but also bleed damage, which is inflicted each turn until the battle is terminated.

Damage inflicted is computed as per the following algorithm:

Attacker hits with a longsword for a damage 10.7 and hits the shield with defense 10

If a character is stunned, he can be stunned for n turns, where the number of turns for which the opponent is stunned depends on opponent constitution:

When the player is stunned:

Cutting damage is the damage inflicted by the weapon slicing into flesh of an opponent. Cutting damage causes the initial damage but also bleed damage, which is inflicted each turn until the battle is terminated.

Weapon is consumed accordingly to the following formula:

If the hit part had an equipment with defense:

Weapons and Armor is consumed while fighting. Every Weapon and Armor has a Wear Factor that is used to correct the weapon consumption.

A Critical Hit can deal severe damage. Only some Weapons can deliver a Critical Hit. Please check [Weapons] page to find out. The chance of delivering a critical hit will depend from the weapon that the player is using and from the difference between attacker and defender intelligence and dexterity.

If a weapon has a Critical factor of 19x2 it means that to deliver a Critical Hit with that weapon one must score at least 19 on a d20. Once established that a weapon scores a Critical, opponentes Intelligence and Dexterity are evaluated.

Energy is very important in battle (for example you see in the previous formula that impacts the number of consecutive hits). The Energy depletion formula will depends on the following variables

The above variables values will been normalized as per the following theory: How to Normalize Data so thwy will be converted to values between 0 to 1.

Armor Encumbrance is computed as follows: